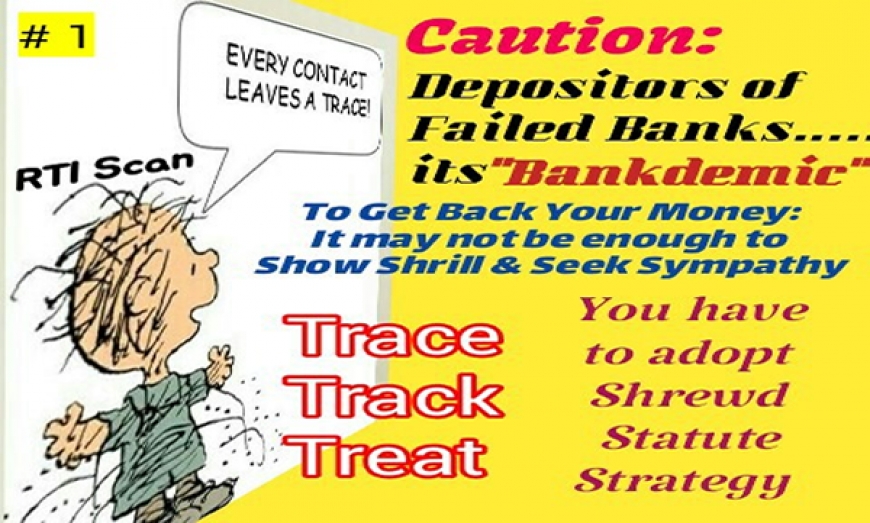 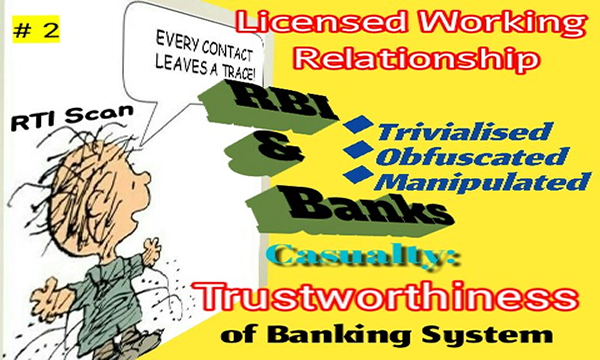 The RBI issues Licenses to Banks to provide the Public with Statutory Money Transaction Services as Financial Intermediation Agencies. The Banks hold Public's Funds on Trust........ Chasing the Service Provider's Balance Sheet to recover your Money will leave you nowhere. You Parked your Money and you are entitled to get it on Demand. 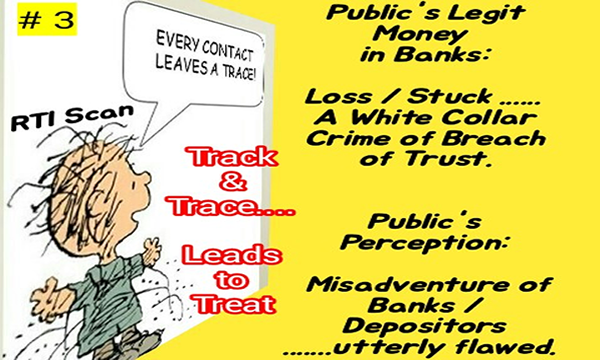 Loss of Deposits in Banks happens due to Criminal Negligence coupled with Deficiency in Service; You will loose your might as and when you Trace & Track the Institutional Balance Sheet to recover your Money Stuck in the failing Banks.
Instead, the Depositors must Track and Trace their Relationship with the Bank in which they have Parked their Money; and if the Bank fails to honour your Relationship..... Treat them in the way it should be.
#4 Know Your Bank 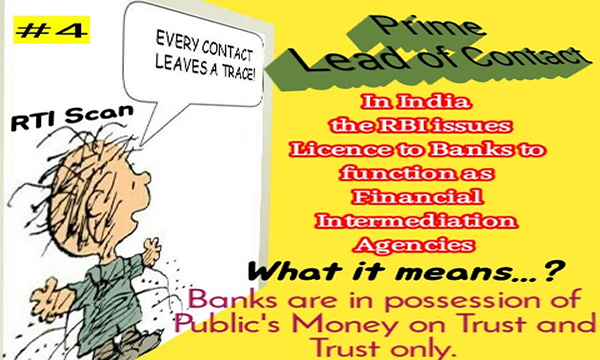 Loss of Deposits at Banks is not a Claim of Civil Nature; but, its a Crime of Breach of Trust. You can fight for the access your Money in whatever the manner in which you may want to fight.
Its a must to Document your vagaries you have faced because of the denial of Money.
The sanctity of the Banking Platform in which Depositors have parked their Money is that whoever fails to honour the Banking Platform....is culpable for Commission of a Crime and liable to Compensate. 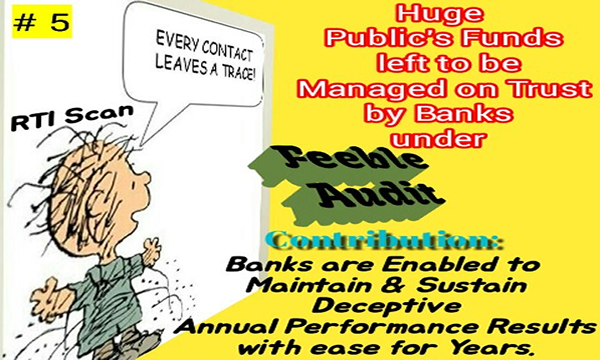 Moratorium in Failed Banks:
"Search for the Tip of the Uncooked Noodle"
In India, the RBI is the Sole Institution, which is empowered to issue Banking Licenses and it owes the Responsibility as the Regulator over all types of Banks,, more so, after the Computerized Core Banking System, is in place.
The Initiation of Failure of a PSU / Private / Co-Operate Bank - is one and the same - Feebleness of Audit.
In India, Vijay Mallya & Nirav Modi Bank Fraud cases are generally clubbed, as though they are Twins; but, both are genetically different. Because, in Vijay Mallya's case, it was an Over-Drawing Default - Absence of Adequate Collateral Security; but, in the case of Nirav Modi, it was the Absence of even Basic Features of Systemic Security.
That is, though the individual PSU Bank did not have any Sanctioned Loan Limits even by way of Letter of Understanding (LOU) with Nirav Modi, the PSU Core Banking System of that Individual Bank was yielding to requests from various other Banks, in which Nirav Modi was in a withdrawing spree of Public Funds. that too, in the foreign soil.
So whenever a Bank fails, the period of Moratorium is prolonged , the RBI Administrator will be "Searching for the Tip of the Uncooked Noodle"...... but, whether the Depositors wait is worth it? 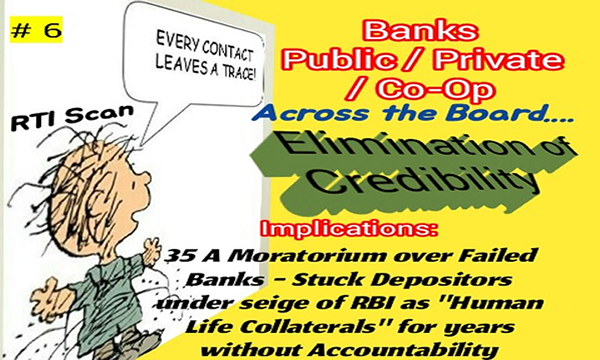 "Redemption of Depositors' Bonds of Banking as Bonded Humans"
Once, the Sec.35A Moratorium been imposed upon a Failing Bank by the RBI .... its nothing but lay siege of the RBI over the Depositors' Bonds (Accounts) of Banking with that Bank and that too, under the pretext of saving the Depositors' Money.
Irony:
But, the fact of the matter is that the RBI - under the pretext of saving the Depositors' Money, the Depositors' themselves are taken as "Bonded Humans" vide "Bonds of Banking" (Accounts) with that Bank in a Country, where "Bonded Labour" is a Crime.
Of Course,
"Bonded Labour" - Exploitation of Humans to perform a Labour under Siege & Compulsion; thereby, the Exploits will have the Burden to "Ensure Life of the Bonded Labour"
Whereas in the case of,
"Bonded Humans" - Wholesome Exploitation of Humans by laying siege over their Resources of Living Means and keeping them under Compulsion to find alternate resources by trading off their own Dignity; thereby, the 35A Exploits have the liberty of waiving off all kinds of Responsibilities over the Life & Livelihood of Humans under their Siege....
Imposition of 35A - Moratorium over Withdrawal of Bank Deposits, is an Intervention of the nature of "Seizure of Human Life and Livelihood". It has to be Time Sensitive and stretching it at Will, is a Crime against Humanity.
#7 Know Your Bank 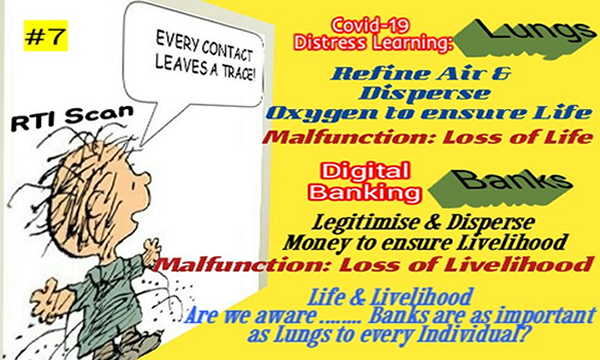 Of late, in a Digitalized Banking System,
Bank Accounts of Individuals are far more than important than their Lungs.....have this Country acknowledged this fact.
Sadly No. If its Yes, by now there will be an overwhelming Uproar / Support for the Depositors who were Stuck in a Failed Bank, under Moratorium.
Curious Similarities:
Lungs feed Refined Oxygen for Life; whereas the Banking Accounts give Legitimate Money for Life and Livelihood to the Individuals.
In a Pandemic, Quarantine for the Infected and Seal Down & Lock Down for the Community; likewise, its Quarantine for infected Bank, Seal Down for the Depositing Community.
Curious Difference:
The Depositing Community under Seal Down have to yield their Lungs (Bank Accounts); so that, "Transplantations" can be tried over the Infected Bank and be revived.

Curious Question:
No one is asking ..... Why the People in Seal Down have to provide their Bank Accounts ....... "Lungs" to the Failed Bank, which got infected because of its own Irresponsibility?
Curious RTI Inference:
The virus of Bankdemic is artificially manufactured and slipped out through combinational inefficacies of Multiple Regulatory institutions.
#8 Know Your Bank: 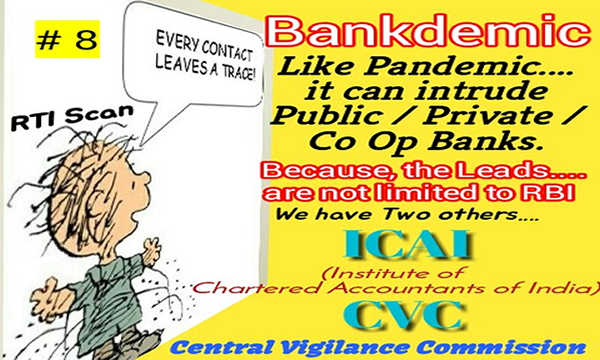 The "Bankdemic Virus" (Banks' running out of Money), is not limited to Co-Op Banks, as it is been presumed to be; but, this Virus can intrude in to any variants (Public / Private / Co-Op) Banks.

As usual in India, the discriminatory practices prevail that the Co-Op Banks are bound to be let down, even while others are rescued with "Special Care".
The Cruel Ill-Effects of the "Bankdemic".........
Conversion of Human Depositors into 24x7 Life Supports for Banks:
It is that the Money Depositors of the "Failed Banks", who are to be rescued out with alacrity; are' themselves ruthlessly taken as Permanent Captive " Free of Cost Human Oxygen (Money) Cylinders"; these 'Human Oxy Cylinders (Bank Deposits)" risking their own life, are bound to feed the necessary Oxygen (Money); that, the Failed Bank can afford to Breathe...... 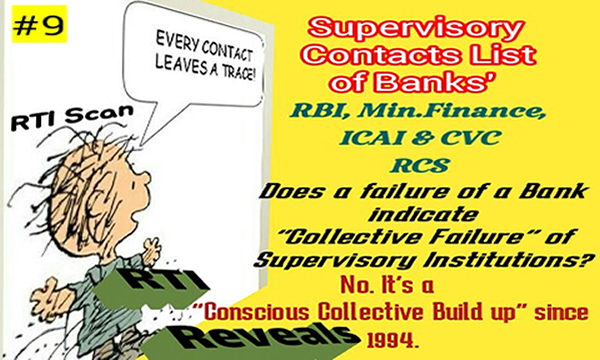 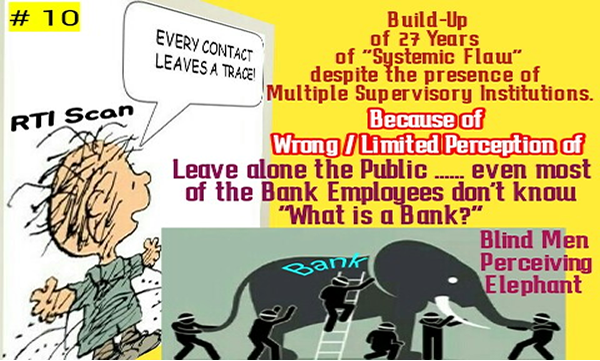 We have 61 guests and no members online